In December of 2010 Monoxivent received a request from Applied Science Engineering, Detroit, MI. They needed to design a corrosion resistant, insulated containment tray for 8″ scum pipe and two 4″ hot water pipes. The total length being 1,600 feet running between 7 buildings and they needed an easy access cover system.

Monoxivent worked through many concept changes, with the final design completed and ready for bid in June of 2013. Monoxivent was awarded the contract in January of 2014 and the final project completed the following November. The tray and cover sections are double wall urethane foam insulated (R-7), and the 36″ x 18″ deep tray sections are encased in reinforced concrete. The embedment angles, cross supports and the building wall pass through sleeves are all 1/4″ thick #316 stainless steel. Monoxivent also designed and supplied 220 each fiberglass pipe support brackets.

From start to finish Monoxivent was an integral part of this project from concept, design, manufacturing and on site assistance.

The Wastewater Treatment Plant, located at 9300 W. Jefferson Avenue in Detroit, is the largest single-site wastewater treatment facility in the United States. Of the more than $22.5 million spent to ready the plant for its February 1940 startup, $10 million was spent on plant construction with the balance going to complete the network of huge interceptor sewers through which a combined stream of storm and sanitary wastewater flows to the plant from communities throughout metro Detroit.

The treatment plant was originally designed to provide primary treatment (screening of solids and chlorination) for the wastewater generated by 2.4 million people and, with modifications, as many as 4 million people. The plant’s service area in 1940 included Detroit and 11 nearby suburban communities. Secondary treatment (more rigorous screening and treating and disinfection of biodegradable solids to produce an even cleaner effluent) was introduced in the 1960s. DWSD’s Wastewater Treatment Plant continues to be the recipient of continual upgrades in order to ensure it is capable of staying abreast of ever more stringent regulatory standards. 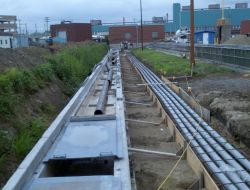 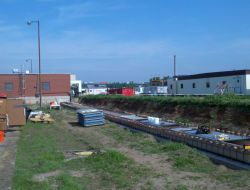 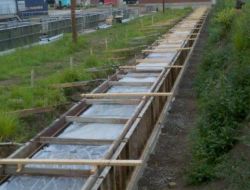