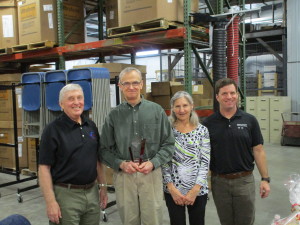 Crawford Co./Monoxivent honored Terry Cahill for his years of service during a reception today. Cahill served as a Division Manager and Product Manager for the company’s FRP (Fiberglass Reinforced Plastics) Products Division. He began with the company in 2008 and helped build the company’s Fiberglass Division from scratch, including brands UnderDuct and Corrosion Composites.

Fellow co-workers, past co-workers, friends, and family joined in recognizing the versatile employee that managed industrial and commercial projects. Cahill was known, nationally, within his industry. He most recently served on a national committee for SMACNA. Prior to Crawford, Cahill worked from 1981-2008 in various capacities, including president, at Yankee Plastics.

“We would like to thank Terry Cahill for sharing with us his knowledge and experience of FRP products. I personally have learned much from Terry and will endeavor to use that knowledge to further grow Monoxivent’s FRP Division, which was originally started under his guidance. We wish him well on his transition into this new and exciting phase of his life,” said Jim Wischhusen, current FRP Division Manager.

“We have been very fortunate to have Terry on our team,” said Ian Frink, Vice President. “He has served as a leader, mentor, and direct liaison to our rep base. Terry worked on projects of all scopes and sizes and did so professionally, effectively, and efficiently. We wish Terry and Sandy (his wife) the best moving forward!”